In the month of March I was involved in a Garlic Knot Block swap.  At home we sewed our 2 1/2 inch strips.  Each person supplied the black and white fabrics, the red was supplied by the workshop.  (We all know that red is a difficult color to match).  Now, here I am trying to get these together.

After playing with the layout, I determined there was A LOT of red.  To break up the red, I am zig-zagging the blocks and sashing them with other 2 1/2 inch scrappy strips as well as black and white.  The way I am sashing is creating a secondary block which breaks up the red nicely.

The pro’s I have listed above, the con’s I will list below.

For those of you who have participated with swapping blocks, let me tell you, all 1/4 inch seams are NOT created equal.  *SIGH*  There were people there who did not know how to sew, and I knew this would create a problem.  I was unsure of the magnitude.

So far I have reworked more blocks than blocks that are good.  Two blocks I tore down all the way and realized when they cut, the cutting skills had not developed properly and so I kept the red, and the rest went into the scrap bin.  I then proceeded to sew two more blocks from the black and white fabrics I had on hand.

It is frustrating, and I am experienced.  I feel sorry for those who have no sewing skill set at all as these will not go together without being trimmed down as much as 1/2 and inch (YIKES!).  I have decided that trimming down blocks is not frugal.  Someone just paid $10 per yard for this fabric and trimming them down would just be such a waste.  This would equal 40 inches in the quilt.  That is throwing away one yard of fabric.  I refuse! Sometimes, things do not go as planned or the easy way.  Sometimes the best lessons in life as well as quilting are learned the hard way.

Will I participate in one of these again?  I have been invited to attend the TOGA association of treadlers in Lone Oak, TX.  I have no idea the skill set of the individuals attending as I have never met, messaged, emailed, or spoken to anyone from this guild.  They are having a block swap.  The blocks look simple and so perhaps I may delve into this again.  I would be required to make 20-25 blocks by April 21st.  Not sure if I can make that deadline.

I am excited about this meeting as I will get to meet a doctor of old machines who will give valuable information for caring for your old featherweights, treadles, and old machines in general. 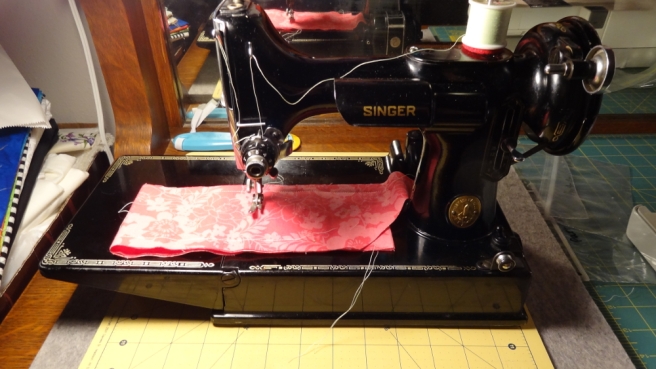 Incidentally I have decided on a name for my new/old machine.  I am naming this machine Abacus.  I am really going to count on this machine for a long time, hence this unusual name.  Abacus will stay in the family, hopefully for at least one more generation to count on.  I had never heard of anyone naming their sewing machine a masculine name, but have come across an individual who calls her old featherweight Dean Martin (because he was a singer—too funny).

So, what have you named your machine?

2 thoughts on “Red in Knots”